They Only Eat Their Husbands 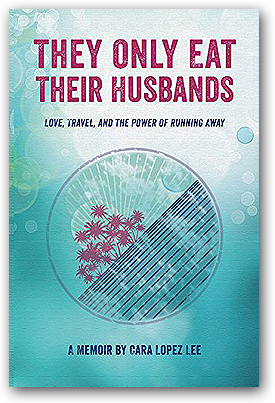 The day after Scott left, Chance called. My heart started beating with the same silly eagerness as a puppy's tail thumping the floor. He invited me for a hike up Flattop, a popular mountain just half an hour outside town. Without asking why he hadn't called in two weeks, without stopping to think about his last words to me, I leapt at the chance to see him again.

Flattop was always the handiest place to remind myself that, although I lived in a city, I still lived in Alaska. It only took forty-five minutes to hike to the top of the 3500-foot mountain, and it was a relatively easy trail for anyone in decent shape. Yet it was also an easy place to achieve a sense of accomplishment, with steep rises and a hand-over-foot scrabble up craggy rock, leading to an incredible view. The top looked as if someone had chopped the peak off with a cleaver, giving Flattop its name. The flat surface seemed to confuse the ever-shifting, swirling air, leaving the top invariably cold and windy.

Just in case the winds might be in his favor, Chance packed his paraglider on his back. But as we rose above the twisted hemlock of the lower slopes, the wind was already whipping us. So he hid his paraglider in some bushes on Blueberry Hill, to retrieve on our way down. Now that he was empty-handed, he offered to carry my daypack. "I'm okay for now," I said. "But I may take you up on that later."

A short way up the trail, he said his throat was sore. "I put some cough drops in the top of your pack, can I grab them?" I waited as he stepped behind me and unzipped my pack to rummage around for a lozenge. Later, when we reached the steepest section of the hike, I said, "Okay, I'll take you up on that offer—you can take my pack now." His face twitched in a mischievous grin as he took my pack, put it on the ground, and unzipped it. "Okay. But first...I won't be needing this anymore." He reached into the pack, pulled out a huge rock, and tossed it to the ground, where it landed with a thud. It weighed at least five pounds. Then he innocently tossed the pack onto his shoulders. Chance had never needed that cough drop. I stared at the rock, slack-jawed, then pummeled him. As we stood there giggling, I realized I was in love with him. That damned rock seemed to seal it.

A short time later, when we pulled ourselves over the final crag and onto the abbreviated peak, the wind nearly knocked us over.

"Isn't this great!" Chance shouted over the shrieking air. "I love extreme weather."

"Yeah, it's great, but my ears are freezing!"

We ran for cover behind a cairn, where Chance huddled behind me, cupped his hands over my ears and blew on them. His breath felt hot, in exciting contrast to the cold. When we felt warm enough to stand, we took in the 360-degree view: graceful saddles led in several directions to the severe alpine beauty of the Chugach Mountains, while below us Alaska's largest city looked like a toy model and Cook Inlet gleamed in the sun. No one else was on the mountain and we ran around like children, giddy with the freedom of having this windswept view to ourselves.

When we were too cold to stand it anymore, we scurried down the mountain and back to his place. We curled up together on his futon while Chance talked, his soothing voice buzzing in my ear. I relaxed into a feeling of warm contentment and, in characteristic fashion, spoke my thoughts aloud without stopping to consider them: "Chance, from now on I don't want to be with anyone but you."

The comment came from my desire to completely attach myself to Chance. Yet that comment severed me from him in a way I didn't expect, because this guy who'd told me he was lousy at commitment had assumed I'd already made one. His body stiffened with anger.

"What do you mean? Have you been with someone else? Did you see your old boyfriend again?"

"Well, yes. You stopped calling and I thought I wasn't going to hear from you again. So I thought I'd give him another chance. But that's my point: when I saw him, I realized I didn't want to be with him, I wanted to be with you. So I told him it was over."

He sat up and pushed me away. "When exactly did you tell him this?"

There was no getting out of this situation. I have a profound aversion to lying, based less on merit than on ingrained defensiveness over being wrongly and regularly accused of lying as a child. I could refrain from speaking, but he would know the answer by my silence.

As my mind raced for a reply, he repeated, "When was the last time you saw him?"

"Did you sleep with him?"

I sat in embarrassed silence.

"Damn it!" He jumped off the couch as if I'd burned him. "You have no idea what a turn-off that is for me. So you broke up with him, but you sent him away with a big smile on his face, didn't you? And I was starting to think I'd met someone who was so different. I thought this was special."

I'd thought so, too, and I could feel it irretrievably slipping away. I babbled, "Don't you see? I tried to give my old boyfriend a second chance, but it didn't work because I realized I was falling for you."

"Then how could you do that with him?"

Puzzled, I turned back and gave him a hug. He held me tightly. I felt confused by his mixed signals. I remembered him telling me he wasn't good at commitment. What had he expected? Then again, what had I expected? I pulled away and left.

Return to the They Only Eat Their Husbands page